Millions of people co-own closely held companies, family businesses, and business partnerships, but establishing them and keeping them together is never easy. Here, finally, is the guide they have been waiting for.... Read More

David Beard, Ken Severs and Brenda Elwell work for their kids. Sure, most parents do. But these three, like more and more parents across the country, are employed by their kids. And this reversal of traditional roles seems to work well. Two years ago Monique Elwell called her mom, Brenda, looking for advice. Monique had left her lucrative position as a Merrill Lynch securities analyst to start a risky Internet travel service. She was looking for someone who would be willing to “jump off the cliff” with her and risk everything in a business challenge that had no guarantees. Because her mother had 30 years of travel industry experience, Monique hoped she might know someone crazy enough to embark on such an adventure.

After Monique described the position, there was a silence on the other end of the line.

They were both surprised. After more discussion, Brenda quit the job she had held for 10 years to work for her daughter. The business, Amisto.com, in New York City, prospers today, and Monique and Brenda have discovered they work well together.

“Our relationship in the office is very professional,” Brenda says. “My daughter addresses me by my first name. I have goals that must be met like any other director in the company. Have there been conflicts? Not so far. And we don’t anticipate any. We are both focused individuals with similar work ethics, and we share the same vision for the company. We respect each other’s area of expertise.

“And what is it like working for my daughter? Totally liberating!”

Her daughter agrees. “Because we’re mother and daughter, we communicate faster than others might.” Monique says. “And we are very familiar with each other’s strengths and weaknesses. It’s a very workable and profitable relationship for both of us.” 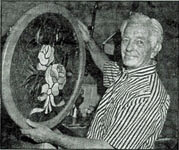 Though Brenda and Monique call each other by their first names, Kerry Severs calls his only employee “Dad.” When Ken Severs of Fort Collins, Colo., was laid off from his job as a heavy equipment operator nine years ago, he started filling in for absent employees at his son Kerry’s radiator repair shop. When Ken’s old company asked him to return to work, both he and Kerry realized they had a good thing going.

“With Dad working here, I don’t have to worry about employees not showing up or having their fingers in the till,” Kerry says. “Dad is more willing to flow with the ups and downs of the business. If it’s a tight week, we both pull in our belts. If it’s a good week, we both let the belts back out. We trust each other.”

“If the parent and child don’t already have a happy, healthy relationship before starting to work together, working together will not change that.” says Gage, founder of BMC Associates in Washington, D.C. “In fact, the relationship can grow worse.” Many parents end up working for their kids in the course of turning the family business over to them, Gage says. But other kids start their own businesses and entice their parents to come to work for them.

“In both instances it’s an opportunity for the family to grow closer, often making up for earlier distances,” Gage says.

Gage encourages families who work together to sit down and talk about expectations.

“We walk our clients through many scenarios,” he says. “Such as, what happens if the business gets into trouble? Who makes the final decisions? And will mom or dad be expected to bail out the child?” 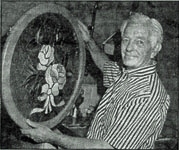 “She was working out of a corner of her Denver apartment and had too many orders,” David says. “I started helping her pack, load and take pieces to shows in the region. I discovered I loved showing people her work and making sales. Now I put in anywhere between five and 100 hours a week.”

David and Lisa make assignment sheets for each other.

“She takes the lead. I sort of follow,” he says. “The parent-child role is almost reversed. But actually, it’s adult to adult, and very nice. We work well together, and since we’re so close, if one of us does something that upsets the other, we already know it without having to say it. That makes for a very nice job atmosphere. I don’t think it gets any better.”

“What most parents want, even more than money, is respect and appreciation,” Gage says.